Fed may trigger 'bigger corrections' in stock market with its actions: strategist 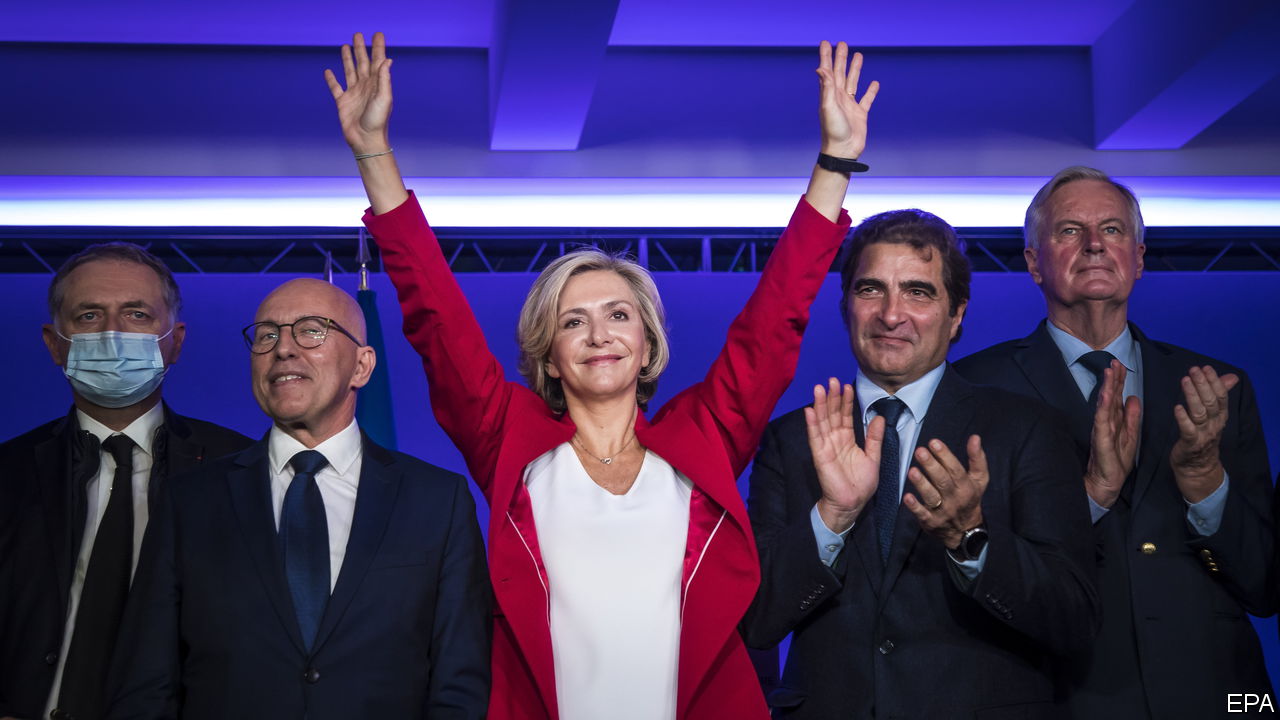 COULD THE French for the first time elect une présidente when they go to the polls next April? Ségolène Royal nearly got there as the Socialists’ candidate, in 2007, but was defeated by Nicolas Sarkozy. Ten years later Marine Le Pen, a populist-nationalist, was soundly beaten by the centrist Emmanuel Macron. Now the Gaullist political party is taking its turn. On December 4th the Republicans picked Valérie Pécresse, head of the Ile-de-France region around Paris, as their presidential candidate.

In a run-off primary vote among party members, Ms Pécresse trounced Eric Ciotti, a deputy from Nice and an anti-immigration hardliner from the party’s right wing, securing 61% of the vote to his 39%. Days later Elabe, a polling group, recorded a leap for Ms Pécresse from fourth to second place, suggesting she could beat Mr Macron in a run-off. Nomination bumps are common, and other polls recorded a smaller one. But the former budget minister and fellow graduate of the elite École Nationale d’Administration suddenly looks like a credible challenger.

Before the primary campaign, Ms Pécresse was seen in some quarters as an outsider. Polls suggested that if selected by the Republicans she would do worse in a presidential vote than Xavier Bertrand, a rival primary candidate and head of the Hauts-de-France region. Like him, she had quit the party, for her part in exasperation at its fecklessness. But Ms Pécresse performed well in the four televised primary debates, coming across as serious, well-briefed and trenchant. She was also careful to remind viewers that she can be a vote-winner. Earlier this year she was re-elected head of the Ile-de-France region, crushing the hard right, the Greens and the centre. In the end, at the primary, party members preferred her to both Mr Bertrand and Michel Barnier, the European Union’s former Brexit negotiator, both of whom were eliminated in a tight vote in the first round.

A long-time party hack, Ms Pécresse is a familiar figure in France. First elected deputy 19 years ago, she is a protégée of Jacques Chirac, a Gaullist former president, and became a minister under Mr Sarkozy. She describes herself as “two-thirds Merkel, one-third Thatcher”: a blend of consensus-seeking politics and reformist steel. As higher-education minister Ms Pécresse took on the unions to give universities more autonomy. As a primary candidate she pilloried Mr Macron for not cutting civil-service jobs and for “burning through cash” with his high public spending.

It is a mistake, though, to cast Ms Pécresse uncritically as a party centrist. The product of a Catholic private-school education, she is culturally as well as fiscally conservative. Ms Pécresse voted in 2013 against the legalisation of gay marriage (though she later accepted it), and espouses a tough immigration policy, including an end to the automatic right to French citizenship of those born in France.

Ms Pécresse may have triumphed in the primary, but she now needs to keep a divided party together. Eric Zemmour, a reactionary polemicist, has declared that he too is running. This has dragged the debate onto toxic ground. As it is, in 2017 Mr Ciotti refused to vote for Mr Macron to keep out Ms Le Pen. Now he vows he would prefer Mr Zemmour to Mr Macron were that the choice in 2022. He has already complained that since her nomination Ms Pécresse has not embraced his views properly, before the pair hastily arranged a truce for the cameras at a restaurant in Nice.

If she can tread this line deftly, though, Ms Pécresse will make a tricky contender for Mr Macron, who remains most polls’ favourite for 2022. On the centre-right, she could win over some Macron supporters who are alarmed by high levels of public debt. On the hard right, she could lure some former Fillon voters who have been tempted by Mr Zemmour. The polemicist’s candidacy will split the hard-right vote and lower the hurdle for getting through to the second round. With the left enfeebled, this means that a run-off between Mr Macron and a centre-right candidate, which looked unlikely a couple of months ago as the Republicans squabbled, is now entirely plausible. So far only one poll has suggested that Ms Pécresse could then beat Mr Macron. But that is not a bad start. ■

As war looms larger, what are Russia’s military options in

'Hope she will give out names' Former friend says Maxwell

Amazon could be planning a new way to upgrade your