Do you invest as successfully in stocks as Fidelity Investments does? Would it help your stock picks if you knew what Fidelity mutual funds are buying?


Here’s your chance. You can see where Fidelity expects to find the richest opportunities by seeing the behemoth Boston-based fund and brokerage complex’s biggest second-quarter buys.

Nearly all of the data reflect moves by Fidelity mutual funds. But a tiny part of the totals include trades by Fidelity ETFs, says Todd Rosenbluth, head of ETF and mutual fund research of CFRA Research. Rosenbluth compiled the buys, sells and share counts.

Fidelity Mutual Funds: Stocks That Fidelity Investments Is Betting On

Many of those key moves by Fidelity mutual funds were in foreign stocks. Based on number of shares, Fidelity’s top new buy in the second quarter consisted of 70.7 million shares of Sinopharm Group. The Hong Kong listed drugmaker’s product lineup includes a Covid-19 vaccine. China’s market alone is huge.

Another big buy was Fidelity’s purchase of 16 million shares of Arena Minerals, which is listed in Calgary. The Canadian company searches for lithium and copper, and explores in Argentina and Chile. Lithium is a key component of batteries, including those in electric vehicles.

Fidelity Investments mutual funds added 5.6 million shares to its single share in Sanne Group. Effectively, Fidelity began a new position in the second quarter. Sanne is listed on the London exchange and provides asset management services. It specializes in alternative assets and corporate services. At the moment, it is the target of rival takeover bids.

How To Trade Foreign Stocks

You can invest in foreign stocks through accounts at such brokerages as Fidelity and Schwab (SCHW). Like many brokers, TD Ameritrade provides access to ADRs (American depositary receipts) over-the-counter (OTC) foreign stocks.

Fidelity mutual funds bought many U.S. stocks too in the second quarter. Some were super-popular FAANG stocks.

Collectively, Fidelity funds boosted their stake in Facebook (FB) by 2.3 million shares, or 2.2%. In the quarter, Facebook’s share price rose 53%, according to FactSet. The value of Fidelity’s position climbed $120.8 million by June 30.

And Fidelity added about 7 million shares to its cumulative Apple (APPL) holdings. That 2.5% increase was worth $103.5 million.

Range is an oil and gas explorer and producer. It is active in the Southwest and Appalachia. It’s share price rose 6.22% in the second quarter. That made Fidelity’s 15.7 million shares as of June 30 worth $101.2 million.

Range is up 102% this year going into Wednesday even after pulling back 19% in the past month.

Earnings per share growth sizzled at a triple-digit pace the past two quarters after declining or posting losses for nine quarters.

Some of the lower-profile names Fidelity bought in the second quarter lag FAANG stocks in name recognition just slightly.

Fidelity snapped up nearly 8 million shares of Snap (SNAP) in the second quarter. That boosted Fidelity’s share count by 29%. Snap’s 30% jump in share price boosted the value of Fidelity’s stake by $126 million.

The bulk of Snap’s users are people age 13 up to their 30s. Earnings per share have grown at a triple-digit pace four straight quarters. Most of Snap’s revenue comes from advertising.

Fidelity mutual funds increased their share count in Intuit (INTU) by 17.03% in the second quarter. The share price of the maker of TurboTax, QuickBooks and other accounting software popped 107.11% in the quarter. That boosted the value of Fidelity’s stake by $104.9 million.

Dutch-based ASML (ASML), which has a Nasdaq listing, saw Fidelity mutual funds gobble up an additional 46.12% shares. By quarter’s end, each share was worth 62.4% more. That was an increase of $116.4 million in Fidelity’s holdings.

ASML makes equipment used to manufacture computer chips. Its lithography systems are the only ones that use extreme ultraviolet light (EUV). Basically, EUV’s tiny wavelengths are good for making chips with extremely small nodes, or transistor gates. The smaller they are, the more that can fit onto a chip.

That enables the chips to make calculations faster.

Fidelity mutual funds also feasted on drugmaker Moderna (MRNA). It pumped up its share count by 26.62%. With Moderna shares rising in value by 104.03%, Fidelity’s shares were worth $98.5 million more at the end of the quarter.

Fidelity mutual funds initiated stakes in 431 stocks, according to CFRA’s Rosenbluth. Also, they expanded existing positions by at least 10,000 shares each in 11 stocks. 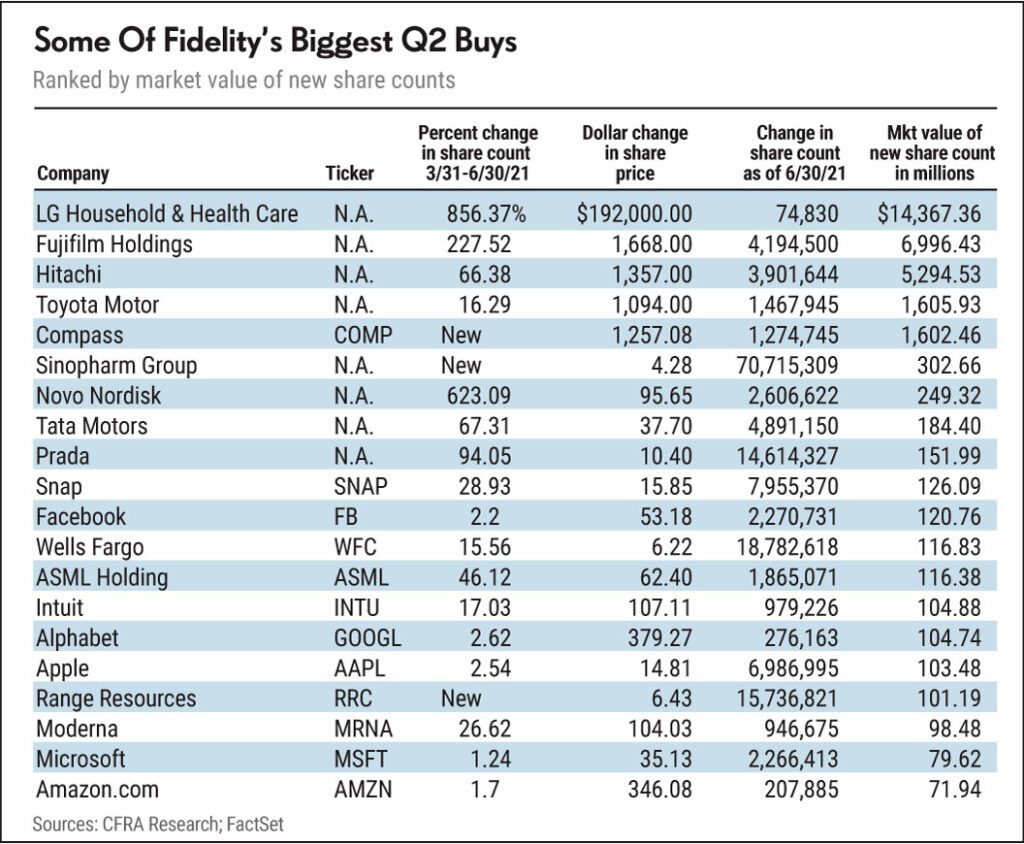 Follow Paul Katzeff on Twitter at @IBD_PKatzeff for tips about retirement planning and actively run portfolios that consistently outperform the market.

You Need This Much Retirement Savings At Your Age And Income

Which Stocks Are Breaking Out Or Near A Pivot Point? Check MarketSmith