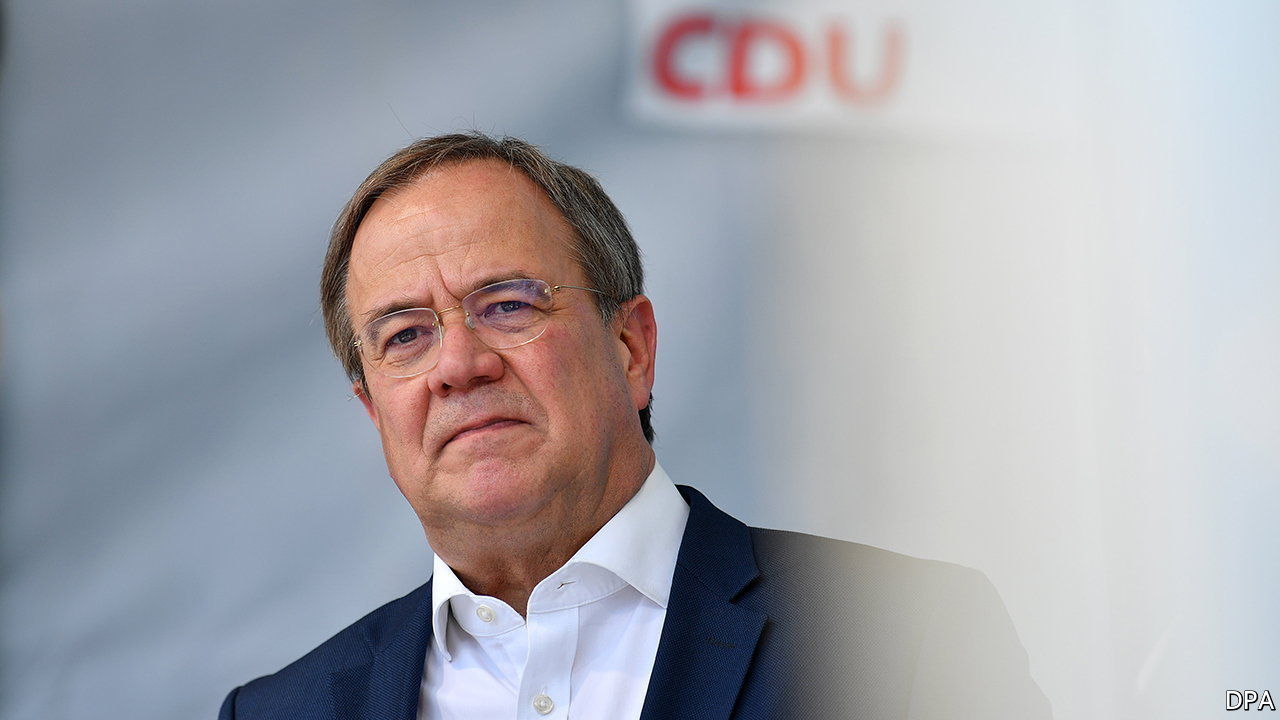 PANIC HAS set in at the Konrad Adenauer House, the Berlin HQ of Germany’s ruling Christian Democrats (CDU). The long-ailing Social Democrats (SPD), under the steady hand of Olaf Scholz, their candidate for the chancellorship, have opened a clear polling lead, and Armin Laschet, the candidate for the CDU and its Bavarian CSU ally, is plumbing new depths of unpopularity. What to do? Mr Laschet’s answer was to unveil, on September 3rd, a group of obscure advisory “experts” to lend his floundering campaign intellectual heft. They spanned the CDU’s “Christian-social, liberal wings”, beamed Mr Laschet, meaning that they could not agree on a single thing. Observers detected desperation.

A second tactic has been to raise a red scare. Mr Scholz has not ruled out forming a coalition with the Greens and Die Linke, a small hard-left outfit partly derived from East Germany’s Communists. (Nor will he; to do so would reduce his leverage in post-election coalition talks.) The liveliest moment in an otherwise dull televised debate between the chancellor-candidates on August 29th came when Mr Laschet launched a broadside against Mr Scholz for holding the door open to Die Linke. Two days later even Angela Merkel, who has sought desperately to stay out of the campaign, repeated the charge. Mr Scholz, an ultra-moderate who is as likely to invite the Russophiles of Die Linke into government as he is to don a Karneval outfit and down a litre of Kölsch on the streets of Cologne, can probably take the blows. A poll on September 2nd, the first since the debate, gave the SPD a five-point lead over the CDU/CSU—the biggest yet.
__________

To a Hoffest (roughly, a party in a courtyard) in Charlottenburg, a posh neighbourhood in west Berlin, where Christian Lindner, leader of the liberal Free Democrats (FDP), is geeing up the party faithful at a campaign event. Mr Lindner takes potshots at Robert Habeck, the Greens’ co-leader and a possible rival of Mr Lindner’s for the finance minister’s job in the next coalition. Mr Habeck’s plans for debt-fuelled investment, declares Mr Lindner, run up against a linguistic problem: “debts” (Schulden) sound a lot like “guilt” (Schuld). So instead, howls Mr Lindner, Mr Habeck decides to rebrand it as “credit”! Cue much guffawing. Some years ago Mario Monti, a former Italian prime minister, said that Germans treated economics as a branch of moral philosophy. Perhaps he was right.
__________

Almost 60 years ago Germany signed its first “guest-worker” agreement with Turkey, which kickstarted several waves of migration between the countries. This week Mrs Merkel held a ceremony at the chancellery to pay tribute to Germany’s guest workers and their descendants. “Integration cannot remain a seven-generation task that is never completed because your name is not Klaus or Erika,” she said. It was a laudable sentiment from a chancellor who, in her quiet way, helped usher in Germany’s slow acknowledgment of its own diversity (more than one-quarter of the population have what Germans call a “migration background”). The sceptical outsider might wonder why, 60 years on, such a statement remains necessary.
__________

The federal election is not Germany’s only vote on September 26th. Two of the 16 states will also be choosing their assemblies. And if the election in Mecklenburg-West Pomerania, a sparsely populated north-eastern state, might struggle to set pulses racing, the Abgeordnetenhauswahl in Berlin, one of the three city-states, should be a livelier affair. A few months ago the Greens thought they were cruising to a victory that would double the tally of states they run. But as nationwide polls go, so, it seems, do metropolitan ones: the SPD has lately opened up a clear lead in the capital. In May Franziska Giffey, the SPD’s charismatic candidate for mayor, had to quit her job as federal families minister amid—what else?—a plagiarism scandal which saw Berlin’s Free University strip her of her doctorate. But Ms Giffey’s campaign is going from strength to strength—even if wags have taken to defacing election posters bearing her name with an artfully placed “Dr”.
__________

In engineering-mad Germany there is a tool for everything—even voting. Thursday saw the launch of the “Wahl-o-Mat”, an online election guide which asks voters three dozen questions on matters like wind-energy subsidies and asylum policy, before telling them which of 40 parties have views that best match their own. Before the 2017 election a staggering 15.7m voters cranked up the Wahl-o-Mat. The number that based their votes on the result is perhaps a little smaller, but either way there is great sport in starting a questionnaire believing yourself to be a Green, social democrat or conservative—only to find that your views align perfectly with Die Urbane, the “hip-hop party”, or V-Party, which aims to advance the interests of vegetarians and vegans.

For more coverage of the German elections, visit our dedicated hub