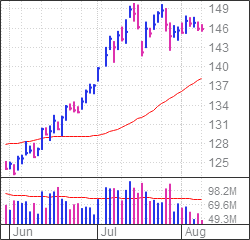 Apple (AAPL) is the IBD Stock Of The Day as the consumer electronics giant shows strength ahead of its iPhone 13 launch next month. Apple stock is trading just below its all-time high.

On July 9, Apple stock reached a buy point of 145.19 as it broke out of a 23-week consolidation pattern, based on a weekly chart on IBD MarketSmith. It remains in the 5% buy zone, which extends to 152.45.

Apple notched a record high of 150 on July 15 ahead of the company’s June-quarter earnings report on July 27.

Earlier, on June 30, Apple stock hit a buy point of 137.17 out of a cup base, according to a daily MarketSmith chart.

Apple stock has been trading in a narrow range since it posted blowout results for its fiscal third quarter ended June 26, thanks to strong iPhone sales. Lately, it has found support at its 21-day exponential moving average.

Apple stock could offer an additional buy point if it breaks its current short downtrend. Also, if it keeps moving sideways for two more weeks, it would form a flat base.

All Eyes On iPhone 13 Launch

The next potential catalyst for Apple stock likely will be the introduction of the company’s iPhone 13 handsets in September. The new models will be Apple’s second-generation 5G smartphones after the current iPhone 12 series.

On Monday, Monness Crespi Hardt analyst Brian White reiterated his buy rating on Apple stock with a price target of 184.

In a note to clients, White said, “Apple has enhanced its value proposition (during the Covid-19 pandemic) by introducing new innovations (and) supporting a more digital lifestyle.”

He believes the iPhone 13 launch in September will be the next mover for Apple stock.

Apple Car In The Works?

Meanwhile, the Korea Times reported Monday that Apple has been in talks with multiple Korean companies about supplying components for the rumored Apple electric vehicle. Apple has held “early stage talks” with LG Electronics, SK Group and Hanwha Group, the article said.

Video Game Stocks Hit By ‘The Great Reopening’ After Covid

See Stocks On The List Of Leaders Near A Buy Point